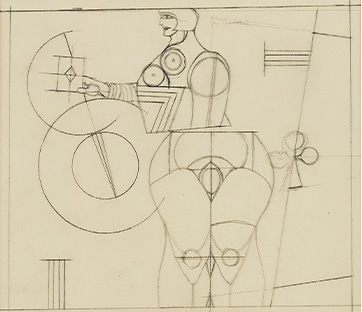 Richard Lindner had his first one-man show in New York at the Betty Parsons Gallery in 1954. He was then fifty-three years old, and had been living in New York since 1941. His first great success, however, occurred nearly a decade later in 1963, when his paintings were included in one of the periodic exhibitions of Americans at the Museum of Modern Art. This show coincided with the first wave of enthusiasm for Pop art, and because of the superficial resemblance Lindner’s work bore to certain aspects of Pop-its glossy color, its slick surface, and its use of the commercial iconography of big-city street life-there was an understandable tendency to regard him as a Pop artist. Lindner very much admired certain Pop artists, moreover, especially Warhol and Oldenburg, and it was perhaps inevitable that the huge attention lavished on Pop art in the mid-sixties would result in some mistaken notions about the older artist’s work, which had been formed on quite different principles and on the basis of a very different experience. Not for  the  first time  did   an   artist’s  success  have   the  effect  of