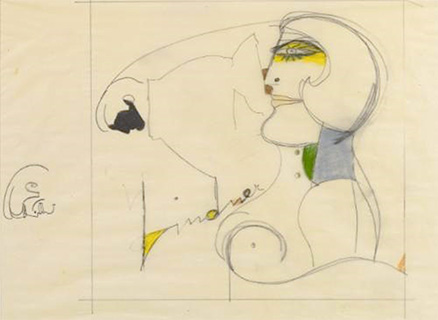 Whenever Richard Lindner’s paintings are exhibited – whether in Britain, France, Italy, or the United States – the written responses show a remarkable uniformity of diction. His paintings are called perverse, Freudian, nightmarish, obsessive, lascivious, decadent, deviant, and frequently, « German, » implying a specific harshness and cruelty.
Critics have relished describing what they believe to be Lindner’s erotic fantasies, and some have even gone so far as to advise him to see an analyst. They have almost without exception treated the work and the man as an indivisible unit.
On the whole, they have centered their attention on Lindner’s preoccupation with women in their role as temptresses. By ascribing Lindner’s visions of corseted whores and gauntleted chorus girls to his personal and aberrated imagination, these critics obscure the complexity and strong element of paradox in his work, and they neglect two important dimensions: the literary and the historical.
Lindner  has  always  maintained  that he is a literary artist. His