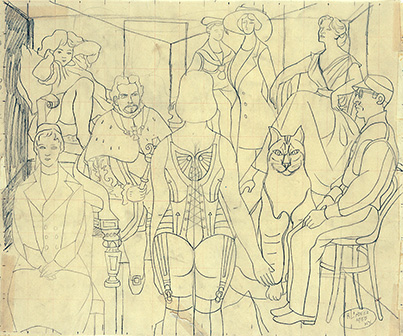 Preface of the Catalogue Raisonné

How did Lindner come to this fractured, discursive style? In 1933, the Jew Richard Lindner had to leave Germany. The sense of fear and constraint surrounding his figures goes back to this wound. Let us not forget that even into the fifties he was known exclusively as a graphic artist in advertising and as an illustrator for journals such as Town and Country and Vogue. There are clear traces of these origins in the early works’ – produced when Lindner was admittedly already fifty years old. One might describe these pictures as based on some kind of deficiency. The observer Lindner had to compensate. The precise working out of a motif as a drawing precluded swift gesture. For this reason, too, after his conversion to painting and drawing, Lindner was protected from any involvement with the American avant-garde, the role of automatism and expressive gesture. His approach also had little to do with the self-experimentation that was supposed to help the younger generation of artists to set themselves apart from the spontaneity and automatism of Action  Painting. Lindner found